We Make A Difference 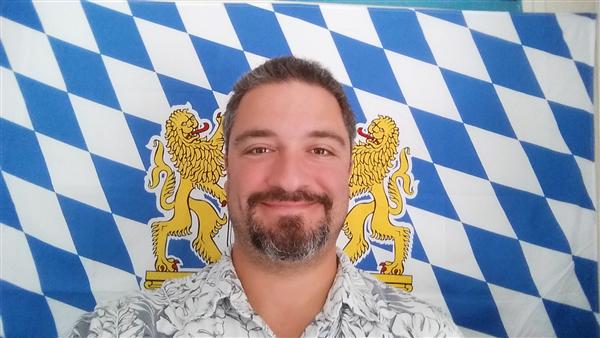 Photograph of Alexander Herman in front of the Bavarian Flag, because I was the first student from Randolph-Macon College to have a Marketing Internship in Munich, Germany. Bachelor of Arts Degree from Randolph-Macon College in Business/Economics and German; University of Phoenix, Mathematics and Education Certification; Masters of Art from University of Maryland Baltimore County in STEM Education; Certifications: Secondary Mathematics, Business Education, and World Languages-German; Project Lead the Way Engineering Certificates for Digital Electronics and Principles of Engineering from UMBC; as well as, Engineering Design and Development (Capstone) from Bucknell University.

Please enjoy this back to school presentation Alex Herman Back to School 2022 .

I am excited to have been a member of the Queen Anne's County High School community since the 2015-2016 school year as a mathematics teacher. I have also had the pleasure of teaching Engineering, Business Management, Foundations of Technology, and Personal Finance at Queen Anne's County. Since joining the CTE department, I helped our first set of students complete the Engineering Pathway by becoming the first teacher at QACHS to teach Engineering Design and Development, the Engineering Pathway Capstone course in 2017-2018. I coached three seasons of JV Soccer at QACHS. We had an excellent season in 2018 achieving a record of 8 wins 3 losses and 1 tie. I coached JV Lacrosse for four seasons at QACHS. We achieved an outstanding record of 39 wins and 6 losses. This is due to the amazing back-to-back undefeated seasons in 2017 and 2018. The highlight of my coaching career was our overtime victory against Kent Island in 2017 to complete our first undefeated season.

I am also proud to announce that I have had many former lacrosse players and students head to my alma mater, Randolph-Macon College, including QACHS 2022 graduate Katherine Monaghan.  Ty Anderson was the Men's Lacrosse team captain in 2019 and recipient of the Bruce Cornbrooks Memorial Award for outstanding leadership, commitment and character. Also making history were the Jones Quadruplets, who were the only quadruplets to all attend the same college and graduate in four years in 2019. Each played four years of varsity lacrosse at Randolph-Macon, and earned numerous accolades.

I am a native Marylander and a graduate of Centennial High School, where I was the lacrosse team captain in 1996. I graduated from Randolph-Macon College in 2000 with a BA in Business/Economics and German. I was the president of Phi Kappa Sigma Fraternity in 1999, president of the German Club 1999-2000, and president of the Fellowship of Christian Athletes (FCA) 1999-2000. I won the Big Man on Campus award in 2000, and I was the Mens Lacrosse Team Unsung Hero award winner in 2000.

I started my career in Human Resources, before heading to the International Monetary Fund (IMF) in 2001. I held several staff positions while at the IMF, including Assistant to the Head of Translation and Interpretation Services, and Program Coordinator in the IMF Institute, the IMF's training department for economists from all over the world. During this time, I enrolled with University of Phoenix to receive the necessary mathematics and education credits to start teaching High School Mathematics. I was a member of the QACPS MA STEM Education Cohort, and received my Masters of Arts degree focusing on STEM Education in 2014.

My wife and I were married in 2005. Our son was born in 2006. My son was the proud recipient of the Principal's Award at Kent County Middle School in 2019-2020. We have several pets, including our cats named Cody and Bethany, our Uromastyx named Ares, and our Golden Retriever named Tilli. In my free time I enjoy playing soccer and lacrosse with my son, building guitars as an amateur luthier, as well as taking canoe and kayak trips all over the Eastern Shore.

I began my teaching career in the 2007-2008 school year with Southern High School. While there, I taught Algebra 1, Geometry, College Algebra, and Personal Finance/Business Math. I was the Boys JV Lacrosse Coach and a Boys Assistant Varsity Lacrosse Coach (2008 and 2009). Southern High School was the state runner up for Boys Lacrosse in 2008. I taught at Kent County High School from the 2009-2010 through the 2014-2015 school years. While at KCHS, I taught Algebra 2, Digital Electronics, Geometry, Precalculus, STEM Seminar, and Trigonometry. I coached JV Field Hockey for two seasons, was the class advisor for the class of 2014 for all four of the students' years, and I was the Assistant Varsity Lacrosse Coach for six seasons (2010-2015).

Notice of Non-Discrimination: The Queen Anne's County Public School District does not discriminate on the basis of race, color, national origin, sex, gender identity, disability, or age in its employment or educational programs and activities. The District is required by Title IX not to discriminate in such a manner. The following persons have been designated to handle inquiries regarding the non-discrimination policies: For Student, Parent and Community Concerns: Brad Engel, Supervisor of Student Support Services, brad.engel@qacps.org, 410-758-2403 For Employment Related Concerns: Mark Farley, Director of Human Resources, mark.farley@qacps.org, 410-758-2403 Queen Anne’s County Public Schools 202 Chesterfield Ave. Centreville, Md. 21617
Copyright © 2002-2022 Blackboard, Inc. All rights reserved.